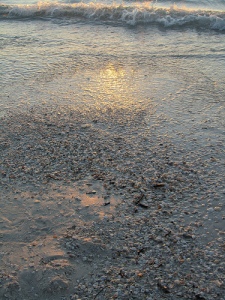 I’ve included a very cute video of a puppy playing with his favorite toy below this post on gratitude, above  my ROW80 check-in.  I hope you enjoy!

After writing about some of my family in the last post, I wanted to express my gratitude to some other family members: my aunt, my brother, and my sister. I am very grateful that my aunt found time to spend with her niece, and that my brother and sister have endeavored to stay connected with me despite the centrifugal force that characterizes my family. My mother’s sister was nine years older than my mother, with no intervening children; my mother always looked upon her as a mother, and I saw her more as a grandmother.  A big believer in idle hands leading to devil’s work, my aunt taught me how to knit, crochet, embroider, and tat when I was very young.  She was teaching my oldest sister, but I hung around like a pest and learned as well. She came to see us every month or so; we were always glad to see her, because she knew all sorts of stories and could bake the best pies and cookies I’d ever had.Even though she always made me keep my hands busy with knitting or tatting while we talked, I looked forward to her visits.  I felt as though she could see me, when very few other grownups could.  She despaired when I became a perpetual student, often shaking her head at my explanations of why I studied all these things.  When I finally got married and settled down with my instant family, you would have thought she had been the matchmaker, she was so proud.  And when we added more children, she was ecstatic that I had given her more children to love.Two days before my youngest son was born, Aunt Ellene felt ill, describing it somewhat like indigestion, but worse.  The hospital gave her heartburn medication and sent her home.  Three hours later, she passed away from a massive heart attack.  My mother debated delaying her planned trip to help me with the new baby, but she came the day he came home from the hospital, missing her sister’s funeral, because that was what my aunt would have wanted. My son is nineteen now, and I still miss talking with Aunt Ellene over our knitting or embroidery.
My brother didn’t become a human being until I was 11 and he went to college.  He actually corresponded with me; when he was home on vacation, he still acted like a jerk sometimes, but that behavior diminished through the years.  He married into one of those huge families that gets together for birthdays and holidays and weddings; I have never asked him directly, but I suspect he felt the same kind of attraction/curiosity at the concept that I did when I first saw this unaccustomed behavior.  No matter, he threw himself into it wholeheartedly, leaving my father to shake his head in consternation at how he and his wife travel cross country to see their kids and grandkids.  I stand back in admiration.Last year, my brother was diagnosed with lung cancer, and had one lung removed.  I had not realized until that point how much I thought my siblings were immortal, nor how hard it would hit me.  He is still fighting, but it is a long path through the woods.  He cannot fly anymore, but he and his wife pack up the car and still travel hundreds of miles to see their families. I am so grateful that he has tried valiantly to establish the sort of relationship with me that his wife has with her siblings. I am thankful to them both for showing me that it could work when I was still young enough to do the same for my own family.

One of my sisters is four years older than I am; reportedly she told my father that I was not the fun kind of baby doll, and would he please take me back.  No luck, sorry!  After this bumpy start, my sister and I started to bond her senior year in high school.  I stopped being the “faery child” who did not seem connected to the world, and started being able to see her.  During her college years, we shared hopes and dreams, despite long periods where one or the other of us would pull away to nurse our wounds in private–she, an abusive marriage; me, an early failed marriage, the abyss of graduate school.  Even now, she calls me regularly; I promise to call her, and forget (I am a very bad sister).  She and I are so different in so many of our world views, but we get each other, especially given our shared history.  I am grateful that she continues to knock on my door and pull me out of my little world now and again.

ROW80 Check-in:
While there is still a lot going on behind the curtain, I haven’t much to offer.  I am uploading hundreds of photographs from the past several years, creating a pool to use in my blog from those and others that are not copyrighted or restricted.  I am slowly shoehorning three blogs into one, and endeavoring to find my voice and my niche.  The hardest part so far is to find what might be most interesting about my odd pockets of knowledge or interests.
The day job is heading into high gear, the rush before the holidays. I’m facing longer and longer days, but enjoy most of the work.  I feel the tidal pull to get back to writing, which is only slightly sated by doing the day job writing.  Soon!
If you can take a break from NaNo or your other projects, please go encourage some of the ROW80 folks here.
Advertisement

2 thoughts on “More Gratitude and ROW80”