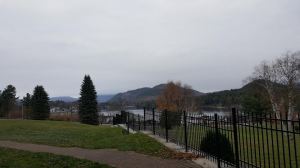 I’m not sure what this writing is part of, whether it will lead to a longer piece or just take up a few more pages than it does here.  It is part of a piece on how I have taken on part of my father’ bucket list, left on the list when he passed away in June, two weeks past his 93rd birthday.  I offer 11 sentences for the day, or the month:

Last month, I attended a conference in Lake Placid, further north in the Adirondacks. I am five  months too late to tell my dad about this part of the Adirondacks, or to show him any of the pictures, but I can share them here.  When we were young, he ended up vacationing in Florida, but once we were older, his own preferences were clear. He always drove north when he had time off, to northern Georgia or western North Carolina, drawn to lakes and brooks cradled by mountains.  I share that attraction, fostered by trips to state parks when I was the last child home, staying in lakeside cabins in the crook of a line of ridges. Driving into Lake Placid, I realized how much he would have loved the surrounding mountains, the calm lake. Well, in the summertime or in the spectacle of its autumn colors.  My father was no friend to snow, so the snow veiling the high peaks would have detracted from his enjoyment of the view.

I knew why he had always wanted to see the Adirondacks, as clearly as if we had spoken about it. Although more worn than the Rockies, the mountains shake free of the deciduous trees first, then shake the evergreens off their granite shoulders, reaching respectable heights of three thousand to five thousand feet. Lakes melted from glacial ice reflect the sky, mountains and trees, witnessing the truth of names like Mirror and Placid, while rivers pound through granite gauntlets, frothing white, throwing mist into rainbows above the water.

WIPpet Wednesday is the brainchild of K.L. Schwengel and newly hosted by A Keyboard and an Open Mind. If you want to join in, or read other WIPpeteers, go here.