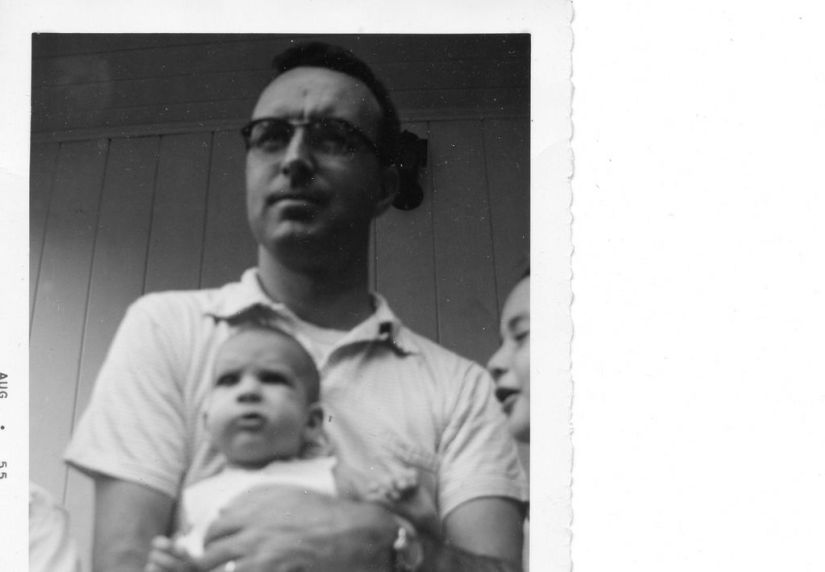 My father was not sure what to do with children, since he had never been allowed to be one.  He spent my childhood bemused by me,  I think. One of the last stories he told my husband, for the nth time, was how, when I was four, I insisted that he was pronouncing maraschino wrong,  and that it was “ma-ra-SKEE-no.” He told my husband that I was a dickens, and my husband assured him I still was. As borne out by the maraschino story,  I was quite the handful, not the most docile child in the world.  He seems comfortable with four-month-old me in the picture above, but then again I couldn’t talk yet.

My grandparents on my father’s side were no role models for how to raise children. They seemed to have no idea of how to relate to children emotionally. My sister remembers our grandfather as a gruff, blustery fellow, and my grandmother was so upset by having a fourth boy, my father, instead of the daughter she wanted, that she ignored him once his sister was born when he was two years old. My father’s stories do not describe warm, fuzzy parents. When I was six, my father was teasing my mother at the breakfast table, telling her how smooth his freshly shaved face was, didn’t she want to feel it? I ran over to him and pressed my cheek to his. He froze as though made of stone. It is only in retrospect that I recognised how odd and sad his reaction is, and how it illuminates how bereft his own childhood must have been of hugs and affection.

As we children got older,  my father found the role of tutor suited him and made him far more comfortable with us. I delighted in his helping me with my Latin homework, and still have his Latin grammar and dictionary from his college courses. Latin was the warmup to get me to do my math.  I never came to like geometry as he did, but with his help, became proficient and even enjoyed trigonometry. My father taught me the love of words, languages, and literature, which eased topics of conversation during my turbulent teenage years. Things became even easier for my father even I became an adult. He found he could talk to me and I found that he could accept it when I told him I loved him and hugged him goodbye after a visit.  He looked shocked for a moment, then said that he loved me, too. It became the closing ritual of our weekly phone call.

I was lucky to see my father for a few days before he passed away, and although he did not speak to me, he looked straight at me when I told him I loved him. What surprised me, but should not have done, was how many people loved him. I was surrounded by people telling me how he had helped them, many just in normal course of knowing him,  but several more through a bereavement group he had unwillingly joined the year before when my mother passed away.  When he talked to me, he claimed that he never had anything to say, but the members of the group told me how eloquent he was about my mother and their 69 years of marriage, and how he had helped them with their grief.

Most notable was a man who was 18 when he met my father, while dating my sister. He told me that my father changed his life, taking him from someone who didn’t have much of a direction, encouraging him to go to college, find a career, and have a family. The man told me simply, “Your father taught me how to be a man.” I think of my father’s upbringing, and am amazed at the adult who raised some good human beings, made a lot of friends, and helped a lot of people in his life. Not a bad epitaph, and not a bad goal. Happy Father’s Day, Daddy.